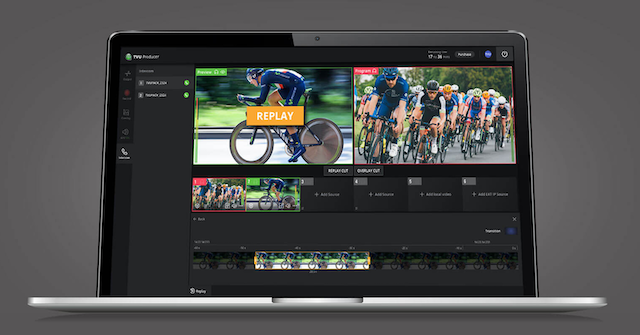 Instant replay and sports production go hand in hand. What would televised sports be without a slow-motion replay of a tag of a baserunner’s slide as he attempts to steal a base or a fullback as he struggles to find a hole in the line and launches into the end zone?

The workflow responsible for those critical replays is well-established and deeply integrated into the production system available in professional mobile production vehicles. However, as I’ve previously written about in the space, remote sports production is changing.

A different workflow –called “at home” or “REMI” (Remote Integration Model) production—bypasses the traditional setup and a lot of its expense by sending IP camera feeds via the internet from the sports venue to a production center, which increasingly is being virtualized in the cloud with the same capability available in a traditional workflow, including instant replay.

Coverage was produced for NBC, NBCSN and Amazon Prime. NBC and Amazon Prime used traditional mobile units from Dome Productions for their coverage; however, for its coverage of action from the outer court Amazon Prime added a hybrid setup leveraging our TVU Networks IP transmission solutions, a 1 Gb/s internet stream for camera feeds and our TVU Producer running in the cloud.

Jason Dachman, chief editor at Sports Video Group, wrote a great article describing the production setup of the event that is available online.

Instant Replay In The Cloud
Working with Amazon on the project, our team identified what specific production tasks Amazon needed for its cloud-based production of the event. We then assembled a collection of microservices specific to Amazon’s needs in our TVU Producer UI.

Of course, instant replay is always needed in sports production, and TVU Producer fulfilled that requirement for Amazon with ease. As I discussed in one of my previous blogs, synchronization of camera sources is fundamental to successful cloud-based live television production.

In the case of the Amazon Prime hybrid production, all incoming camera feeds were synced and recorded in the cloud. When a producer looked at one angle for a possible instant replay, all of the camera feeds were lined up in time, which enabled a review of every camera source so that the best instant replay could be taken to air.

Fully Baked Cloud-Based TV Production
But why focus on instant replay in a discussion of cloud-based live television sports production? Simple, to dispel the notion that if a live production is done in the cloud that sacrificing one capability or another is necessary.

Producers considering a cloud-based live sports production can be certain that all of the production capability they are accustomed to having in a mobile production vehicle is available to them in the cloud, including instant replay.

There’s a common misperception about producing live remote television in the cloud: latency makes multi-camera synchronization impossible. While latency can be a serious problem, it’s simply too general of a statement to say the cloud creates delays that make switching between camera sources and doing all of the other things need for live remote TV production too imprecise and therefore impractical....