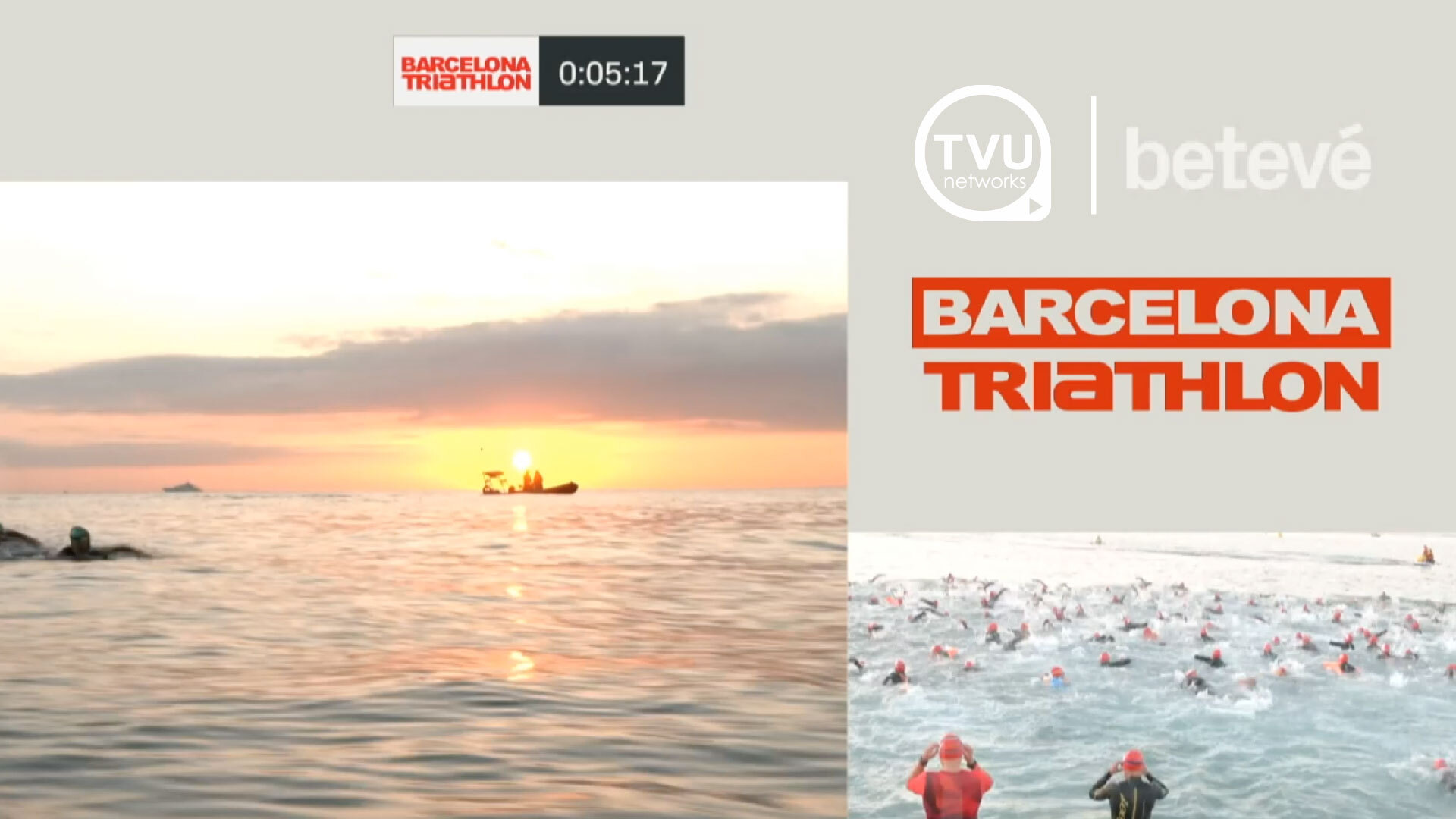 MOUNTAIN VIEW, CA – November 16, 2022 – Engaging more viewers for this year’s Barcelona Triathlon meant going the extra mile for Barcelona public broadcaster betevé with coverage from many vantage points, such as the middle of a race pack, airborne shots, from a boat alongside swimmers,  following a favorite athlete, or from the heart of a cheering fan section. Such flexibility requires flawless multi-camera synchronization; a wireless setup that can easily navigate crowds, shoot from the sky, the sea and speeding motorbikes; and above all, provide stable bandwidth no matter the network saturation.

betevé put 14 of its TVU One mobile transmitters with live streaming encoders to the test during the city’s triathlon on October 9th. The triathlon drew roughly 6,000 participants, competing in various distance categories.

The TVU One’s ability to aggregate up to 12 data connections of any type allowed producers to capture the open water swimming portion of the event from nearby boats, adding considerable impact to its broadcast. Integration of the TVU One units with DJI drones created airborne, live coverage. The ability to include multi-camera coverage simultaneously from various points along the route meant that the progression of many athletes –  professionals and non-professionals – were featured during the live broadcast.

“We were able to cover the Triathlon in a way we couldn’t before,” said Oriol Icart, Technical and Innovation Director of betevé. “With no location restrictions and the ability to capture athletes of all levels, this year’s broadcast was more dynamic and interesting to our viewers. We’ve been using TVU technology for over 11 years, and we were confident TVU would be the best solution to cover this event. It has the stability and flexibility we need for high-profile, live sport competitions – particularly the most challenging among them requiring shots from multiple locations. The ability to produce events remotely has saved us considerable time, and our expenses are roughly 1/10th of what they were. We no longer require an OB van and full crew for transmission. Installation was finished in two hours for the Triathlon. We didn’t need to go onsite and run kilometers of cables as we did previously. Remote production is truly the next level of production.”

The TVU One mobile transmitter and live streaming encoder aggregates the best cellular networks in over 180 countries. It simultaneously aggregates up to 12 data connections, including: cellular 3G/4G/5G LTE, WiFi, Starlink, ethernet, Ka-band and Ku-band satellite, microwave and BGAN. It uses less data and combats packet loss to achieve transmissions with virtually zero latency, down to 0.5 seconds even in a moving vehicle or when going live in 4K HDR/HLG.

“What betevé has done with the Barcelona Triathlon really pushes remote video transmission possibilities,” said Rafael Castillo, General Manager / Vice President EMEA and Latin America at TVU Networks. “Providing simultaneous, live coverage from the air as well as from moving vehicles on land and at sea requires a video-over-IP ecosystem that can handle increased network capacity with flexibility and stability. We’re proud of the groundbreaking coverage our partner betevé achieved and in their continued belief in TVU technology.”

TVU Networks is a global organization with more than 3,000 customers using its IP and cloud-based workflow solutions across multiple industries including news, entertainment media, sports, corporate, streaming, houses of worship and government. Through the use of AI and automation driven technology, TVU helps broadcasters realize an efficient metadata and story-centric workflow through its TVU MediaMind platform for live video content acquisition, indexing, production, distribution and management. The company has been on the forefront of developing the tools needed to revolutionize and streamline the Media Supply Chain. TVU is a critical part of the operations of many major media companies worldwide and is a Technology and Engineering Emmy® Award winner.

Jean Christophe Albou, a seasoned veteran in the broadcast industry, has been named Sales Director of Europe at TVU Networks....

betevé put 14 of its TVU One mobile transmitters with live streaming encoders to the test during the city’s triathlon on October 9th. The triathlon drew roughly 6,000 participants, competing in various distance categories....