MOUNTAIN VIEW, CA – May 5, 2021 – TVU Networks, the market and technology leader in cloud and IP-based live video solutions, was the top pick in the 2021 NFL Draft for cloud-based video distribution. All 32 NFL teams used the TVU Anywhere remote production app and TVU Grid, a cloud-based video distribution network, for footage of their Draft rooms during the three-day draft that began on April 29. Plus, TVU was tasked with supporting the live video feeds of 50 off-site player prospects for the broadcast production.

The draft was held at the lakefront in downtown Cleveland. Van Wagner Sports & Entertainment (VWSE) Productions managed all aspects of the video production.

Top prospects who chose not to attend the draft in person were sent all-in-one camera kits that included a webcam, lighting, and a Mac mini preloaded with TVU Anywhere. The camera feeds were sent to a bank of 25 TVU Servers in Cleveland, which provided up to 50 SDI outputs for use during the live broadcasts. The servers were also networked through TVU Grid, allowing authorized personnel to monitor all live video feeds online, even on mobile devices, using the company’s TVU GridLink.

A separate bank of 17 TVU Servers (providing 34 SDI outputs) in Cleveland was assigned to manage behind-the-scenes video feeds from all 32 teams. The feeds provided live footage of team personnel as they reacted to draft picks and conducted business during the draft. In contrast to the all-in-one camera kits for the prospects, each club was shipped an iPhone preloaded with TVU Anywhere that was positioned to provide coverage of the Draft room. All club feeds were also Grid-enabled, plus an SRT streaming output was provided for off-site monitoring and review. 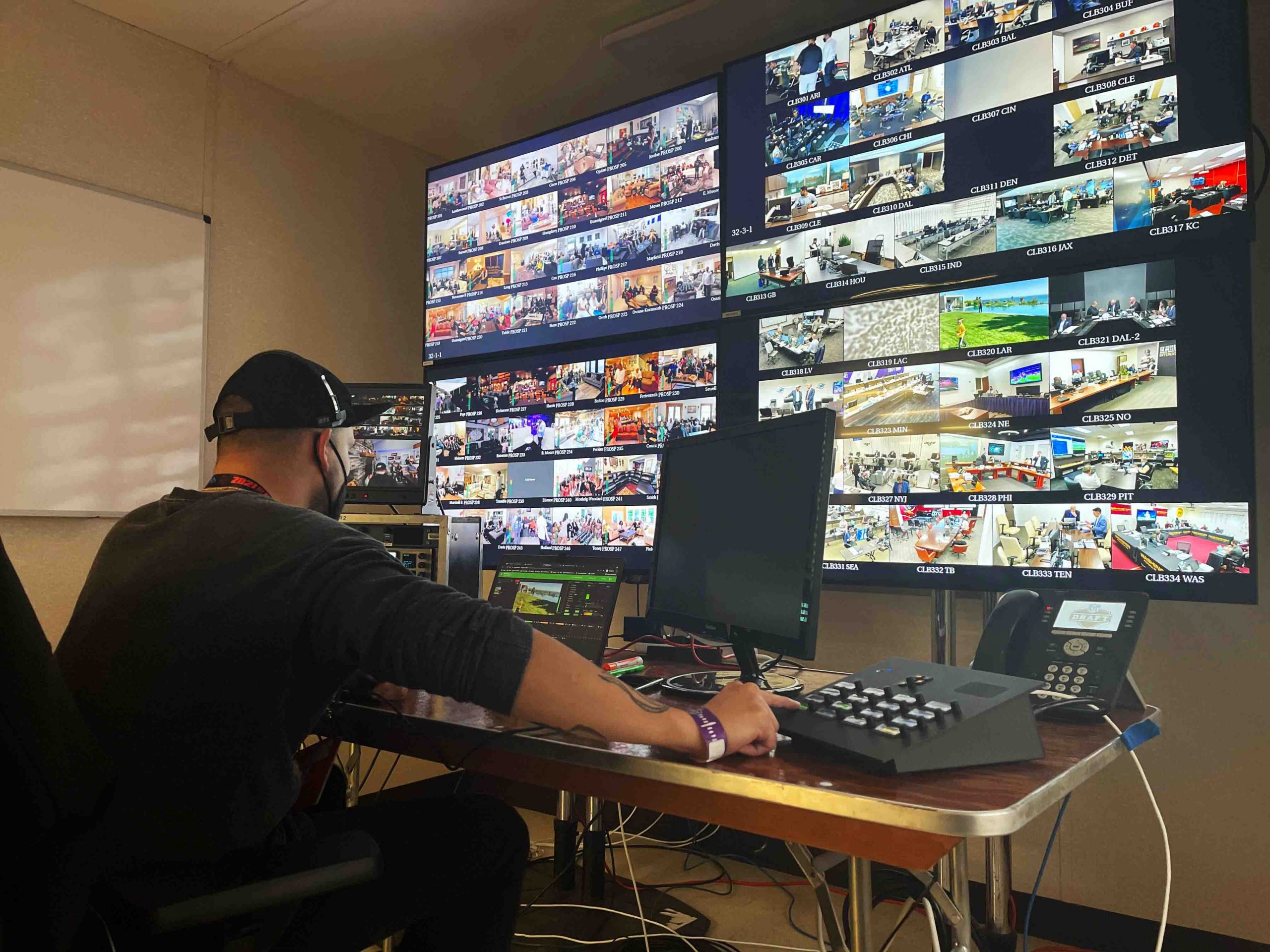 TVU Anywhere allows any smart device to transmit full-HD video for live streaming. It features TVU’s proprietary Inverse StatMux Plus (IS+) technology, which aggregates cellular with WiFi connections to provide a reliable video transmission. TVU GridLink allows for the previewing of live video feeds from practically anywhere, and is embedded with rich metadata to help facilitate real-time content search.

The NFL leveraged the versatility of the TVU Server ecosystems in a number of ways. TVU GridLink enabled remote monitoring of all the team Draft rooms for critical sponsor alignment via built-in access restrictions and secure sharing protocols. Plus, they created a comprehensive archive of all the content using TVU Search, an automated, AI-based solution that enables searchable archive. Unlike many archive solutions, though, TVU Search also enables the content to be searched, clipped and downloaded in real time, as the content is being captured.

“TVU’s solutions worked very well for us during the NFL Draft,” said Nate McCoart, director of technical operations, Van Wagner Sports and Entertainment. “They made it easy to manage live video from dozens of locations across the country for the broadcast, and they were able to manage secure Draft room feeds for both our production and NFL officials.”

“Over the years, the NFL Draft has become an incredibly popular event. We’re proud to be part of the team that helped support the in-person production with remote video content,” said Greg Doggett, director of sports and entertainment and strategic partnerships, TVU Networks. “TVU’s data-centric approach to the media workflow for the NFL Draft simplified the capture and distribution of an enormous amount of content without sacrificing quality or security.”

During the NFL Draft, TVU also offered a free live shot of the front of the Draft location from a high vantage point for bumps and live intros for its TVU Grid customers. The footage was provided by WEWS, the local ABC affiliate.