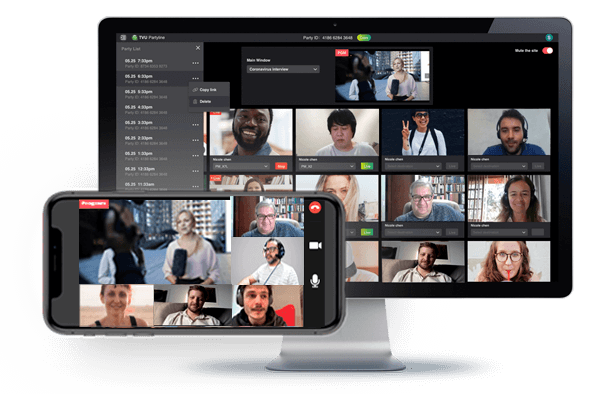 The Line Is Blurring Between Acquisition And Distribution

Something of major importance is happening in the television industry thanks to IP video transport, something that in all of my years in this business I never imagined.

The line between content acquisition and distribution is beginning to blur. The loop from one to the other and back again has gotten so tight that it is now possible to engage a television audience in real-time with what’s on camera—so much so that their reactions appear spontaneous, natural and in sync with what’s being broadcast.

The ramifications of this are enormous as society continues to grapple with COVID-19 and hopefully one day soon emerges from home confinement to a better place.

The Mother of Invention

When the COVID-19 pandemic hit and turned television production upside down, decimating long-established workflows due to social distancing requirements, we knew we had to do something to help our customers over the sizable hurdles working remotely created.

As the proverb goes, “Necessity is the mother of invention,” and nothing could better describe the genesis of TVU Partyline.

With TV stations and networks, production companies and other M&E organizations paring down to mere skeleton crews in house and sending most employees home to reduce possible virus exposure, the need to communicate in a manner that approximated how production crews did when they were together using intercom systems and IFBs became painfully apparent.

Leveraging our ability to perform ultra-low latency IP transfers of video and audio data over the internet with our Real-Time Interactive Layer (RITL), we developed Partyline to solve this common problem.

But it didn’t take too long to realize that the need for these sorts of real-time video and audio communications in live video productions was greater than remote intercom and IFB.

Interviews with newsmakers scattered across the globe could benefit, as could a mainstay of television: live sports production.

The problem facing sports leagues during the pandemic has been finding a way to build excitement among viewers when game attendance is at or near zero. Some have tried to use consumer video conferencing applications to bring in head-and-shoulder video shots of fans watching games at home and then display those videos at the venue—a short of virtual fan-in-the-stand solution.

However, that’s proven to be challenging due to the inherent limitations of the video conferencing apps being used. One in particular is the latency—that is the time it takes for someone watching game action at home to see game action, react and have that video reaction contributed back into the production.

Rather than promoting fan engagement, the offset between game action and viewer reaction has tended to foster fan disengagement.

Not so with TVU Partyline thanks to the Real-Time Interactive Layer originally put in place to facilitate production communications.

For fan engagement applications like those described here, TVU Partyline makes the roundtrip –video of game action from the venue to fans’ homes, their reactions shot with a laptop, tablet or phone and video sent back—in 250 to 300 milliseconds. In essence, that’s real-time reactions by virtual fans to game action.

It’s also blurring the line between acquisition and distribution in a way that was unimaginable before the pandemic struck.