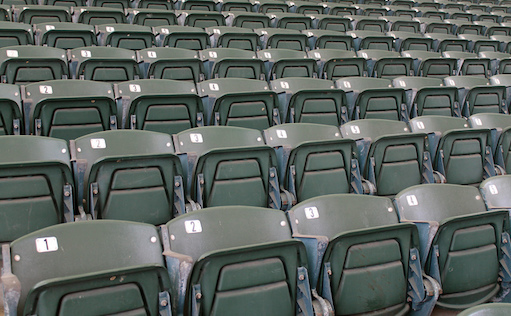 How To Increase Virtual Fan Engagement In Empty Stadiums

Virtual Fan Engagement the new norm?
The COVID-19 pandemic has left sports leagues and teams around the world scrambling to find a way to recapture the excitement real fans sitting in the stands bring to telecasts of games.

In May, the Korean Baseball Organization (KBO) league led off with cardboard cutout fans in stadiums off limits due to the virus. MLB teams have followed suit, charging fans between $25 and $100 to have their cardboard likenesses in the stands at home games.

The NBA has gone high-tech with sports production to address the absence of fans. Using Microsoft Teams, the company’s collaboration app with video conferencing support, the league is giving virtual fans a presence at the ESPN Wide World of Sports complex in Disney World on video walls at the venue.

Sadly, however, something is off with this approach. While the effort is commendable, it’s a little disconcerting to watch.

Rekindling Fan Engagement
Fan engagement is contagious. Like a wildfire, it literally can start in a section of a stadium or arena and grow into a massive conflagration of the fans onsite and millions more at home.

But the approach the NBA is taking fails to rekindle that flame. To be fair, it may be impossible to expect any sort of virtual fan presence to be a substitute for the real thing. But clearly there are problems that should be addressed to make things better.

First, there is an obvious disconnect between the virtual fans on the screen in the arena and the ongoing action on the court. As a result, fan reactions seem surreal—definitely an impediment to drawing in viewers and igniting fan engagement.

Second, the video frame rate of virtual fans isn’t 30 frames per second (29.97fps). Thus, the movement of virtual fans suffers a lot—so much so that it makes the cardboard cutouts of the KBO and MLB look appealing.

Third, virtual fan video is low-res. While that resolution might be sufficient for teleconferencing, it is sorely lacking for TV—something that becomes painfully apparent with the resizing of these fans for the screens.

There may be other issues as well, but addressing latency, frame rate and resolution would be good places to start.

Cloud Video Production
A key part of the solution is leveraging the cloud. There, video of game action destined for air can be delayed by a few seconds. Doing so, makes time for return video from virtual fans watching real-time action at home to be synced with the program feed of game.

Ironically, intentionally introducing this slight latency eliminates the latency that accounts for the weird disconnect between the reaction of virtual fans and floor action.

Solving the frame rate and resolution issues can be done with cameras shooting at the right settings, the right solution for IP video contribution and sufficient bandwidth between the homes of virtual fans and the cloud where their individual feeds are assembled for playout on to the video walls.

Another major benefit of virtualizing video production in the cloud for this application is that far less bandwidth is needed into the venue because only one or two video feeds from the cloud to the monitors onsite is required rather than bandwidth for a feed from each virtual fan.

Will these steps recreate all of the excitement of an NBA game with real fans in the stands? Probably not. But it will elevate the game of the video production mightily and offer TV viewers a presentation with greater appeal.

TVU Networks has partnered with Vimond Media Solutions to supply editors from Vimond IO with real-time access to live video...

Continue reading
Back to All Stories
Get our
Updates