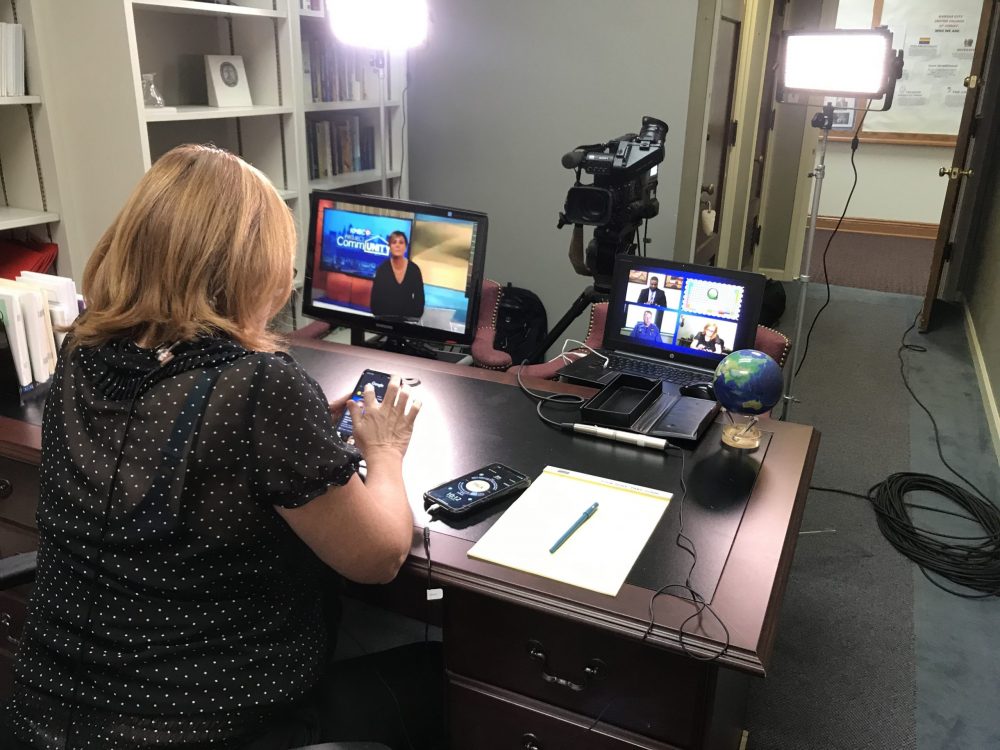 Hearst Television station leveraged a suite of TVU Networks cloud-based solutions to enable guests to interact with one another virtually.

MOUNTAIN VIEW, CA – October 27, 2020 – TVU Networks, the market and technology leader in cloud and IP-based live video solutions, this summer helped KMBC, the Hearst Television ABC affiliate in Kansas City, MO, overcome the technical challenges associated with producing a live, local news special on race and policing during a time when the COVID-19 pandemic restricted in-studio production by bringing in guests remotely and enabling them to interact with one another via TVU’s cloud solutions.

Together, TVU Producer, the company’s live cloud-based production platform, and TVU Partyline, its cloud-based video conferencing solution for live production, enabled the station to provide two return video and audio feeds to the remote guests so they could watch pre-produced segments and see each other during live interview segments, making it possible for them to react to the facial expressions of one another as if they were together in the studio.

“I don’t know that we could have delivered the return video needed to make it possible for guests to have a more natural interaction using traditional means because there were two return paths,” says Neeley Schmitz, director of news operations at KMBC. “You’re talking two satellite shots, and then there would have been a huge delay on the satellite return video. Without TVU, this would have been very difficult to do.”

TVU Networks’ cloud-based low-latency alternative also proved to be far more cost-effective and much less technically complicated than depending upon traditional satellite or microwave feeds to deliver the return video, he adds.

The program, “Project CommUNITY: The People and the Police,” hosted by KMBC anchor Lara Moritz, examined the demands local advocates of police reform have made to the city to change policing policies and to address the bigger issue of local control over the police force.

To enable the low-latency interaction, KMBC used TVU Partyline with TVU Producer to allow all four remote parties to communicate with each other using return video and/or audio via TVU Partyline’s Real Time Interactive Layer (RTIL) that sits on top of TVU solutions like TVU Producer and allows for integration across the TVU ecosystem.

“Initially, the plan was for the return video to be delivered from the studio,” says Schmitz. “But as we discussed how to do that, we determined there was no way to provide the reaction of guests to each other with the way we switch our shows.”

“With TVU Partyline, however, we realized we had a reliable way to make return video a reality,” he says. “While this was one of our first uses of Partyline, it proved to be exceedingly easy to set up and delivered the low-latency interaction needed to make discussion of these important community issue natural.”

The solution involved several simple steps. Schmitz used TVU Producer to create a quad-view box in which the four remote guests appeared. Live video of three guests was shot with ENG cameras and transmitted to the station using the TVU One transmitters. The mayor used the TVU Anywhere mobile app to stream live video of himself from his smartphone to the station.

Each of the four video streams was assigned in TVU Producer to one of the panes in the quad-view box, which in turn was streamed back in HD with no detectable latency using TVU Partyline to the three TVU Ones. Each transmitter was connected to monitors, so the guests could see each other. The mayor, working from his smartphone, listened to the responses via TVU Partyline.

“KMBC’s application of our technology illustrates how our solutions working in concert can solve production problems that arise—especially as the new requirement to respect social distancing mandates takes hold and remote workflows increasingly become the norm,” says Paul Shen, CEO of TVU Networks. “TVU Partyline in particular stands out in this application because it leverages both RTIL and IS+ technology to deliver reliable high-quality video and audio return with no detectable latency in a virtual interactive conference setting.”